Others see a helpful La Nina materialising in the Pacific

A number of global models are factoring in the possibility of a monsoon-friendly La Nina episode (exact reverse of El Nino) evolving in the tropical Pacific later this summer while others expect ‘neutral’ (neither El Nino or La Nina) conditions to stay. In a La Nina phase, clouding and stormy conditions in the Pacific migrate closer towards India to the West of the Pacific Ocean (as against farther away to the East in an El Nino), generally helping the Indian monsoon.

Two out of the eight models surveyed by the Australian Bureau of Meteorology suggest that La Nina conditions may develop into the mid-summer, although the rest indicate that the Pacific is likely to stay neutral. Three leading US models said that sea-surface temperatures in the East Pacific will decrease gradually through the spring and summer, stifling a trend towards El Nino. 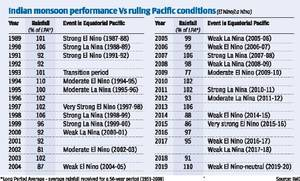 It assessed at 65 per cent the chances of the Pacific remaining neutral and a lower 55 per cent for it to continue to stay as such through the rest of the season. They said that the last four weeks have seen West and Central Pacific SSTs (sea-surface temperatures) warm up to above normal.

The CFS v2 ensemble model, also of the US, predicts neutral conditions to continue through spring 2020, with chances favouring La Nina thereafter. The last La Nina (weak to moderate) had rolled out from 2016 to 2018.

The Japanese and South Korean models have retained their outlook for a reasonably good monsoon for India, with the former betting on a moderately positive Indian Ocean Dipole (IOD) nearer home to continue. One of the strongest positive IOD events had last year driven the 2019 monsoon to a multi-year high, even delaying its withdrawal from the country and delivering rainfall of 110 per cent.

The SINTEX-F model from the Application Laboratory of Japanese national forecaster Jamstec sees most parts of the globe experiencing a warmer spring this year. Into the summer, almost all parts of the globe may experience a hotter-than-normal condition, except for North Russia.

When it comes to the rainfall trend during the spring, SINTEX-F sees drier-than-normal condition for the West of US, Brazil, most part of South-East Asia, Indonesia, Philippines, East of Australia and South of Africa. In contrast, it would be wet to the East of the US, North Brazil, Central Africa, India, Sri Lanka, West of China and the UK. The pre-monsoon rains as on date (March 1 to 17) has already delivered double the normal quantum of rain in India.

The summer may bring wetter conditions to Mexico, India (the monsoon), some parts of South-East Asia, the Philippines, and East China. In contrast, it will be drier climes in California, North-West Brazil, South Australia, North China, and Indonesia. Some of it would be partly due to the expected positive IOD.

The APEC Climate Centre in Busan, South Korea, sees March-April-May, the core pre-monsoon months, delivering excess rainfall over Jammu & Kashmir, Himachal Pradesh, Punjab and Uttarakhand. It will be normal to slightly above-normal for the rest of North-West India and parts of Karnataka and Kerala in the South while Central and West India may remain comparatively drier.

Things will change drastically in June-July-August, the first three monsoon months, which would deliver normal to excess rain for most parts of the country. Tamil Nadu, Rayalaseema and parts of Karnataka in the South may get to see normal rainfall.

A month-wise break-down of expected rainfall provided by the Busan centre predicts the monsoon delivering normal to excess rain over the South Peninsula, and reasonably good over adjoining Maharashtra in the first month June. Gujarat will be another expected gainer during the month, while the rest of the country — especially Jammu & Kashmir, East and North-East India (including East Madhya Pradesh, Chhattisgarh, Jharkhand, Bihar and Bengal) — may end up with deficit.

July will see the monsoon roaring back to form over most parts of the country except parts of Kerala, entire Tamil Nadu, Karnataka and Rayalaseema, where it would be normal. An almost similar outlook is being extended for August as well. July and August are the most productive monsoon months for India. (Source: The Hindu Businessline)