To replace foreign products and materials with domestically produced ones and to create jobs locally, Mahatma Gandhi started weaving Khadi as part of the Swadeshi Movement in 1918.

Khadi is one of the vital segments of the Indian textiles sector. This type of cloth is woven from hand-spun and hand-woven yarn with cotton, silk, and wool fibres. A handcrafted Khadi cloth has a unique weave since each piece is self-textured by artisans. To replace foreign products and materials with domestically produced ones and to create jobs locally, Mahatma Gandhi started weaving Khadi as part of the Swadeshi Movement in 1918. As Khadi became an ideology of independence after 1947, its significance flourished in spinning and weaving.

According to the act, the organization sought to "plan, promote, facilitate, organise and assist in the establishment and development of Khadi and village industries in the rural areas in coordination with other agencies engaged in rural development wherever necessary." Keeping the traditions alive and working towards the promotion of the fabric, the Indian government, over the years, has set up multiple initiatives that made it a reality. 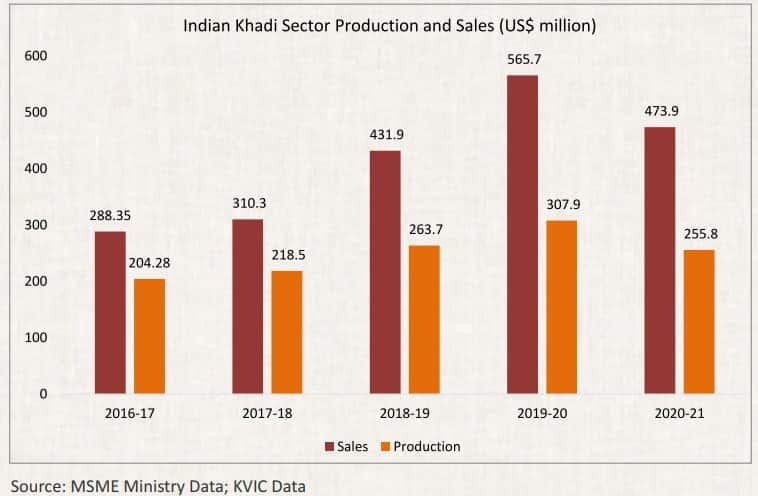 Khadi products in India contribute greatly to the creation of employment opportunities for artisans, particularly in rural areas. Aatmanirbhar Bharat, and ‘Make in India’ are among the initiatives associated with the sector's development. Additionally, employment in the sector increased by 2 percent from 4.56 lakh artisans in FY17 to 5 lakh artisans in FY21. 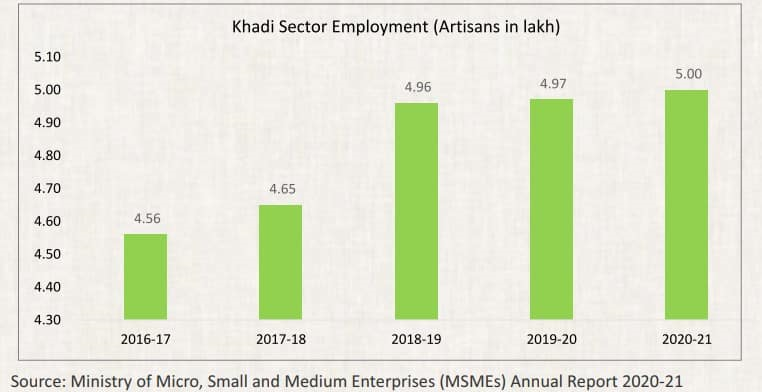 Despite the COVID-19 pandemic crippling businesses across the country, the sales of Khadi products have been surging. This has been thanks to KVIC’s e-commerce launch in July 2020. The launch with over 700 products led to the portal crossing 1 crore gross online sales within eight months of its operations. KVIC was able to deliver over 1 lakh products to more than 10,000 customers out of the 65,000 visitors to the portal. According to the Ministry of MSME, KVIC clocked a massive turnover of Rs 1.15 lakh crore, in 2021-22, which is "unprecedented by any FMCG company in the country". KVIC's overall turnover in FY 2021-22 was Rs 1,15,415.22 crore as compared to Rs 95, 741.74 crore the previous year. This represents a growth of 20.54 percent over 2020-21. The massive turnover in KVIC has occurred despite a partial lockdown of the country from April to June in 2021 due to the second wave of Covid-19.

In a statement released by the Ministry of MSME earlier this year, KVIC Chairman Vinai Kumar Saxena attributed Khadi’s phenomenal growth to the constant support of Prime Minister Narendra Modi to promote Khadi in the country. "Today Khadi stands far ahead of all FMCG companies in the country. By employing new scientific methods and diversifying Khadi’s product range, KVIC has succeeded in achieving such massive growth which no other FMCG company can match," he said.

At the same time, innovative schemes, creative marketing ideas and active support from various ministries have also added to the Khadi’s growth in recent years. The government's push to adopt Swadeshi products as well as the setting up of new PMEGP (Prime Minister Employment Generation Programme) units have reportedly played a vital role in the rise of Khadi.

Prime Minister Narendra Modi's pronouncements of "Aatmanirbhar Bharat" and "Vocal for Local" have been enthusiastically received. As of late, KVIC has focused on creating sustainable employment for unemployed artisans and youths. In response to economic hardship, many youths took advantage of self-employment and manufacturing under PMEGP. This increased production in the village industry sector, with sales of Khadi and village industry products growing significantly following the Prime Minister’s appeal to buy Indian products. (Source: moneycontrol.com)