Area may drop 2% as farmers may switch over to other crops: USDA

The cotton sector is split over its view on the prospects for the fibre crop next crop year (July 2021-June 2022) with a section saying that the area under the crop might increase, while the other expressing pessimism over the prospects of a higher acreage.

This is despite growers getting higher than minimum support price (MSP) for most part of the current season and States such as Telangana declaring their intention to bring more acreage under the fibre crop.

“The area under cotton will increase next season since the kapas (raw cotton) rate is ruling at Rs.6,500-6,600 a quintal. That is almost 15 per cent higher than the MSP,” said Cotton Association of India President Atul Ganatra.

For this season, the Centre has fixed the MSP for medium staple cotton at Rs.5,515 a quintal. “Chances of a higher acreage in cotton are bright as it is the most attractive cash crop,” said K Selvaraju, Secretary-General, Southern India Mills Association – a representative body of the textile industry in the southern region.

The United States Department of Agriculture (USDA), in its annual outlook, said that the area under cotton could remain stagnant or drop two per cent from about 13 million hectares (mh) this season. During the current season, area under cotton dropped to 12.96 mh from 13.37 mh last season, according to the Committee on Cotton Production and Consumption (CCPC). “Farmers are expected to shift to alternative crops such as soyabean and paddy due to better prices,” it said.

Rajkot-based raw cotton, yarn and cotton waster trader Anand Poppat said that there were chances of farmers switching over to crops such as groundnut since returns from these crops were higher compared to cotton. “If farmers grow groundnut, they can cultivate another crop too like wheat,” he said.

“Also, Telangana Chief Minister (K Chandrasekhara Rao) has said that this year cotton would be grown on eight mh. So, Telangana is expected to overtake Maharashtra in cotton acreage and become number two in cotton production after Gujarat,” CAI’s Ganatra said.

The CAI President said that as per information the trade has received, sowing of cotton would increased in Gujarat and Rajasthan, besides Telangana. Overall, the area could increase by eight to 10 per cent. Poppat said the area under cotton in the Saurashtra region could increase next season but the acreage could drop in other parts of Gujarat, Maharashtra and Madhya Pradesh. “If there is an increase in the area under cotton, it could be not more than five per cent,” he said.

The USDA said that the area in North India, comprising Punjab, Haryana and Ganganagar tracts of Rajasthan would increase by two per cent in view of prevailing market prices. In Maharashtra, the area would drop two per cent as farmers could shift to pulses in view of kapas prices ruling around MSP levels only, while in Madhya Pradesh demand for edible oils could see growers switching over to soyabean.’ The USDA expects the cotton area in Telangana to drop 11 per cent and in Karnataka, it could slip five per cent.

The CAI has projected production to be unchanged this season at 360 lakh bales this season from the last one.

“If we are getting a big cotton crop next season, it is good for Indian farmers, ginning factories and spinning mills. A big crop is a win-win situation for the entire textile chain,” Ganatra said. 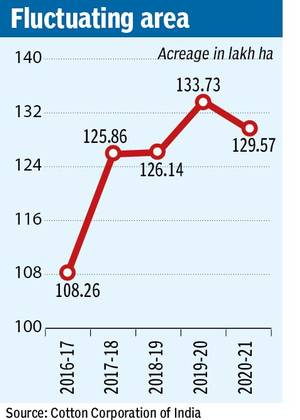 Besides higher production, the cotton industry has also carried over record stocks from last season. According to CCPC, a record 120.95 lakh bales of cotton had been carried over to this season, while for the next season, the carryover stock could be 97.95 lakh bales. The USDA does not visualise any problem with regard to demand for Indian cotton, both abroad and in the domestic market.

“The global recovery in consumption will fuel strong exports of cotton fibre and yarn. In addition, domestic consumption is likely to rise as COVID-19 measures are relaxed and consumers increase their in-person shopping,” the USDA said.

According to Cotton Corporation of India Chairman-cum-Managing Director PK Agrawal, cotton exports could top 75 lakh bales this season on account of good shipments to Bangladesh, Vietnam and China. Poppat said Indian cotton was also finding its way to Turkey.

A major reason for cotton exports topping last year’s total shipments is that it has been priced competitively compared to other destinations such as the US, Brazil, West Africa and Australia. Currently, Indian cotton is offered for exports at Rs.45,300-45,700 per candy (of 356 kg). In contrast, cotton in New York is ruling at 79.90 cents a pound (Rs.47,050 a candy). Usually, cotton from Australia, US and West Africa is sold at a premium to New York prices.

Domestic consumption could increase over five per cent next season to 324 lakh bales from this season, the USDA said. The demand outlook was positive in view of mass vaccinations across the country, it added. (Source: The Hindu Businessline)