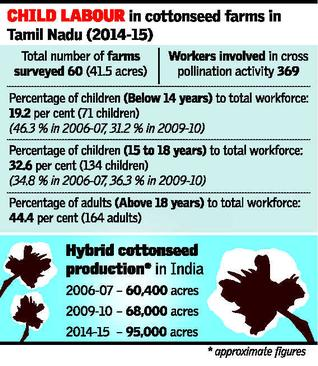 With issues of child labour in hybrid cotton seed production in the country receiving global attention, a study has revealed that there is a sharp decline in the number of children below 14 years employed in the highly labour intensive activity in the recent years.

The study was jointly conducted by India Committee of the Netherlands (ICN), an NGO involved in advocacy work on human rights issues and Stop Child Labour, a coalition of NGOs and trade unions, between July 2014 and January 2015. A team led by Davuluri Venkateswarlu, Director of Global Research, Hyderabad, carried out the study in 396 cotton seed farms in six States, including 60 farms in Tamil Nadu, which account for 90 per cent of the total cotton seed production in the country and submitted a report, “Cotton’s Forgotten Children.”

Of the total 95,000 acres of cotton production in India in 2014-15, Gujarat has largest area covering 48,000 acres (50 per cent) while Attur taluk in Salem district is the main production centre in the State with about 7,000 acres (7.4 per cent), followed by Kallakurichi in Villupuram district and Sitteri in Dharmapuri district.

The survey finds that girls account for 65 per cent of the total child labour and most of them are school dropouts or have never been to school. Since, child workers are mainly employed for cross-pollination period between October and December every year, temporary dropouts during these months have also increased.

Child rights activist P. Balamurugan told The Hindu that awareness campaigns and coordinated action by various departments in carrying out raids in cotton fields in the Attur region has led to drop in child labour in cross-pollination work. However, children in the 15-18 age group are more vulnerable now and focus should be to prevent employing them. (Source: The Hindu)